Are Unicorns Real? A Story of a Narwhal

Unicorns are indeed real, although they can be found not in magic forests, but the cold Arctic waters around Greenland, Canada, and Russia. To be correct, it’s not exactly a “unicorn” but rather a “unitooth” – the narwhal (Monodon monoceros), or narwhale, is a medium-sized toothed whale that possesses a large "tusk" from a protruding canine tooth. The narwhal males are distinguished by a long, straight, helical tusk - an elongated upper left canine – which can be up to 2-3 m. long. The second tusk in males and both tusks in females are hidden inside gums and remain undeveloped – a canine tooth. Male narwhals usually develop only one canine tooth on the left side into a tusk. Narwhals with two tusks are very rare – only 1 out of 500. Only about 15% of females grow a tusk which typically is smaller and less noticeable than those of males.  Scientists have long speculated about the purpose of the tusk. The suggested versions include its use as

The leading idea has been the one about it serving as a secondary sex character for nonviolent assessment of hierarchical status. Judging by the size of the tusk it is easy to determine who is “the boss”. One of the more recent studies shows that there might be another more important purpose of this “tooth” – communication. A detailed analysis reveals that the tusk is a highly innervated sensory organ with millions of nerve endings which helps to connect seawater stimuli in the external ocean environment with the brain. Therefore, male narwhals might rub their tusks together to pass the information about the characteristics of the water each has traveled through. Narwhals usually live in groups of 5-10, either nurseries with females and young, or males (called “bulls”) with post-dispersal juveniles. Mixed groups can also appear at any time of year.

Narwhals can reach up to 4-5m. in length, excluding the tusk of the male. Its closest living relative is a beluga. They feed mainly on Greenland halibut, polar and Arctic cod, cuttlefish, shrimp, and armhook squid.

On the photo of 1911 you can see one of the founders of Darwin museum – Nadezhda Ladygina-Kohts with the narwhal’s tusk. Today the tusk is the part of the museum’s osteological collection. We also have a complete skeleton of a narwhal hanging from the ceiling in our Zoogeography hall on the 3rd floor of the main building. There you can see how big this animal is compared to other animals and humans. 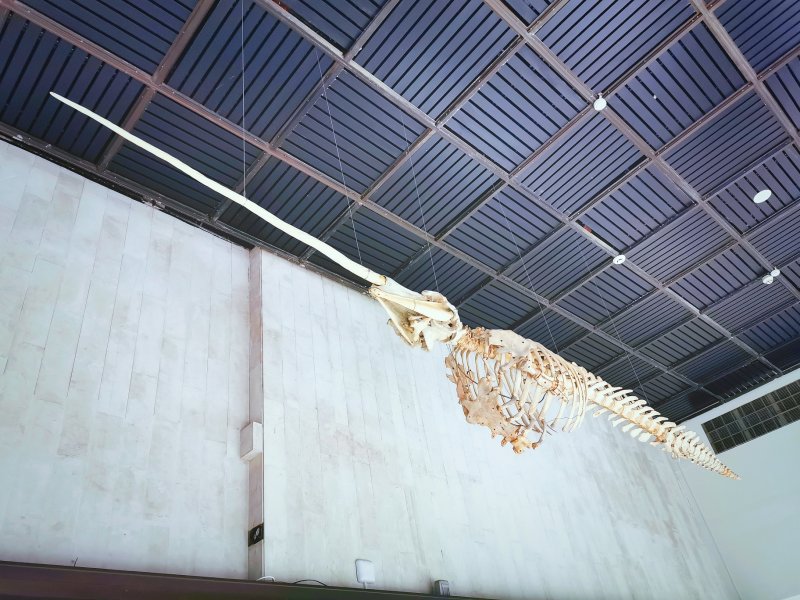