This unusual specimen is not a mollusk shell. It belongs to the argonauts (genus Argonauta) - a group of pelagic octopuses. The females secrete a paper-thin eggcase, which is why they are also called “Paper Nautiluses”. Apart from the visual resemblance, the eggcase has little in common with chambered nautilus shell: the structure lacks the gas-filled chambers and is not a true cephalopod shell. This is rather an evolutionary innovation unique to the genus Argonauta, which is used as a brood chamber and for trapped surface air to maintain buoyancy. Before laying eggs the female's two greatly expanded dorsal tentacles secrete a laterally-compressed calcareous eggcase in which the female octopus will reside with her eggs. The “shell” is often found floating with the female’s head and tentacles protruding from the opening. When sensing danger she can retreat deeper inside.
Another defense strategy is changing color to blend with the surroundings or to eject ink if attacked by a predator. The female can also make a silvery flash by pulling back the web covering of her shell, to deter a predator from attacking.
The largest species in the genus - Argonauta argo - produces the largest eggcase, reaching up to 300 mm in length. The smallest species is Argonauta bottgeri, with a maximum recorded size of 67 mm.
The big “paper shells” have long been highly valued by private collectors. One of the prettiest is that of the Argonauta argo species, especially due to its pearl-white color. The Chinese call it a “white nest of a seahorse”. These amazing creatures have been of great interest to writers and poets as well. For example, argonauts are featured in Twenty Thousand Leagues Under the Sea, noted for their ability to use their tentacles as sails, though this is a widespread myth. Marianne Moore descrived a female argonaut in the poem "The Paper Nautilus". Anne Morrow Lindbergh named the whole chapter in her 's Gift from the Sea - "Argonauta". Paper nautiluses were caught in The Swiss Family Robinson novel. 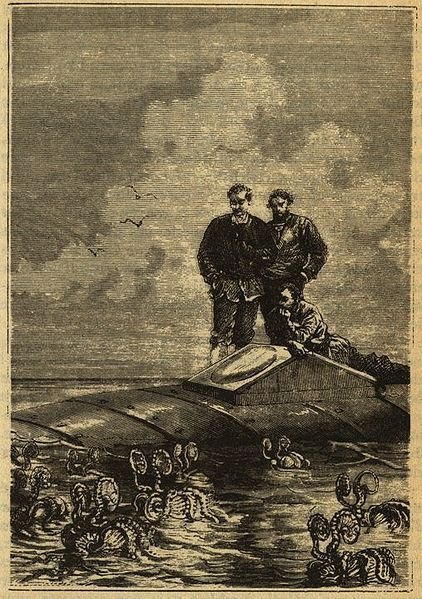 
Legendary alligator Saturn Zebroid – a Horse or a Zebra? Are Unicorns Real? A Story of a Narwhal A Spider & A Scorpion A Paper Nautilus A Monkey or A Lion? Andy Warhol