In 1907 a young teacher A. F. Kohts took his collection to the Moscow Higher Women’s courses to illustrate his course of Darwinism.

The diversity of life on Earth

The amazing diversity of life on Earth is caused by infinite ways of biological adaptability to the environment.

The history of natural science

One of the most beautiful halls of the Darwin Museum

The relationship between man and nature

The origin of man 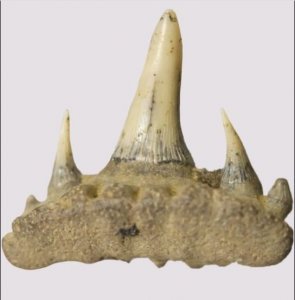 The collection of fossil remnants of cartilaginous fishesformed by the prominent soviet paleichthyologist Leonid GlickmanThe collection of remnants of the fossil cartilaginous fishes was formed by the famous soviet paleichthyologist Leonid Glickman (1929-2000). It includes tens of thousands of scientific items displaying the development if this group from the Carboniferous period until the present time. The collection mainly consists of fossil teeth of ancient sharks, rays, and Holocephali. It also includes the remnants of Teleostei, teeth and fragments of bones of sea reptiles, as well as other remnants of different invertebrates such as sponges, gastropods, bivalves, brachiopods, and echinoderms. Most of the material includes the Cretaceous (over 1000 items) and Cenozoic (over 500 items from the Paleogene period) groups of the Lamniformes.Excluding the small Carboniferous collections, the collection presents the materials from the late Jurassic period until modern times almost without any stratigraphic breaks, namely from the late Jurassic period, early Cretaceous (excluding the Berriasian), from all ages of late Cretaceous, the Paleogene, the Neogene and the Quaternary Period (including the Holocene).In 1982 the collection was donated to the State Darwin Museum by the candidate of biology N.N. Kalandadze, the senior researcher at the Orlov Paleontological Museum, a part of the Paleontological Institute of Russian Academy of Sciences. This collection has great scientific and cultural value. It is known that it took Glickman about 40 years to collect most items, which he did himself (starting from the late 1940s until the 1980s). The entire collection includes the smaller ones formed by other geologists and paleontologists: V.I. Zhelezko, V.V. Menner, A.C. Stoliarov, V.A. Bronevoy, R.G. Garetskiy, N.E. Melnikova, D.V. Obruchev, and others. There are also materials with old labels gathered by A.S. Rogovich (the 1850s), I.F. Sintsov (the 1870s) and a unique collection of fossil shark teeth found during scientific research in the Pacific and Indian oceans (RV “Vityaz”, “Ob” and “Lomonosov”).The collection of Leonid Glickman is world-famous and still remains a unique resource of information on ancient sharks for many scientists and researchers. These materials have been available for study since 2014. Many specialists in paleichthyology from various parts of Russia regularly visit the State Darwin Museum to study this collection: E.V. Popov and A.V. Biriukov (Saratov), specialists in cartilaginous fishes of the Cretaceous period, T.P. Malyshkina (Yekaterinburg), specializing in Paleogene sharks of Kazakhstan, F.A. Trikolidi (Saint Petersburg), specializing in ancient sharks of Crimea.Today, the primary processing and cataloging of samples of the Late Cretaceous period are almost completed. The largest part includes the extensive material from the Saratov region (about 36400 items). The collection includes materials from different parts of European Russia, Crimea, Kazakhstan, Uzbekistan, Turkmenistan, Ukraine, Moldova, Lithuania, and Germany. The database currently contains information and images of 39 500 shark teeth of the Cenomanian period.For more information please contact the keeper and the author of the article Eugenia Baykina. 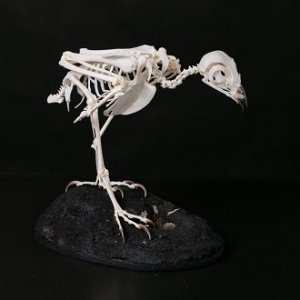 Access to collections can be provided only with the concent of the State Darwin museum director upon the receipt of a written official request:- Scientists/researchers should provide an official request letter from an organization/institute they work for;- Students should provide an official request letter from the Yniversity they study in, containing information on their scientific curator;- Individuals may submit a formal letter addressed to the State Darwin museum director.Dr. Anna Klyukina, director of the State Darwin museumThe official request for the access to Darwin museum collections should contain information on the applicant's Last and First names, official job and occupation, purpose of research, topic and time frame, as well as a statement explaining the need to work with particular museum specimens.The formal request must contain your passport details (date and place of birth, passport number, date of issure and the authorities that issued passport), as well as your contact phone number.The permission to access museum collections will be granted after the formal letter is viewed by the museum's director and the items in question are regarded as available by the Chief conservator;The period for which the permission will be granted will be determined by the museum's director depending on the topic and the amount of work, but not more than one calendar year with the right to review and change of the period by the museum's administration.Should the research exceed the term of one calendar year or shoud the topic change, the researcher/student/individual must submit another written official request.All applicants upon the receipt of the permission get familiar with the museum working hours for visitors as well as rules of working with museum objects. A curator will be assigned to every researcher/student/individual to help organize the work in the most effient way. In case any damage or flaw to a museum object is detected, the researcher/student/individual is to inform the curator of the collection.The museum objects are not allowed to be brought anywhere outside the museum premises.When using museum objects and documents in reserch work, the researcher/student/individual should state their provenance with reference to the State Darwin museum, as well as to provide an author's copy free of charge to the museum upon the publication of work.Video-, tele- and photo shooting and photocopying of museum objects/materials is subject to prior written consent of Darwin museum administration and may be charged according to the museum's price list. 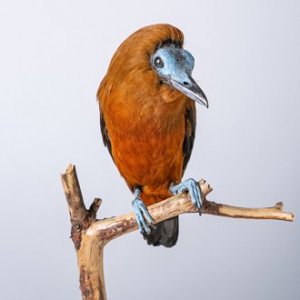 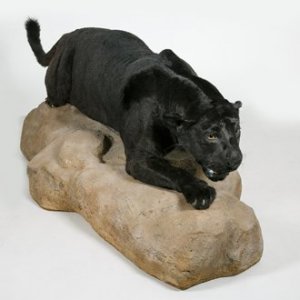 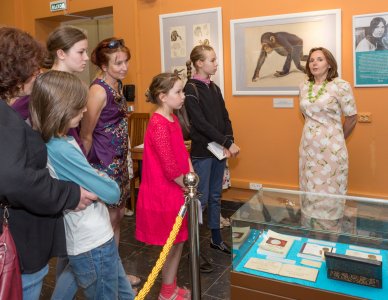 Are animals as clever as we are?Are animals as clever as we are? This question has got not only scientists intrigued. This exhibition unravels the mystery behind experiments on animals within the research of their intellectual abilities.Visitors will get an idea of whether mammals, birds and insects are smart. How big is the gap between animals’ and humans in terms of the abilities of their mind/brain. Observation of animals’ behaviour in the wild sometimes doesn’t provide sufficient data, which can be obtained with the help of scientific experiments set with regard to particular circumstances and environment.The selected experiments remind school program. Animals are tested to learn how to calculate (add up) and recognize geometric shapes, to see whether they have good or poor spatial awareness, whether they are able to construct sentences and build something using their paws, beaks, if they can draw, and finally misbehave like children do during breaks at school. Many of these tasks animals complete as well as or even better than we do.25 panels 1x1 mExhibition program:A quiz, folding instructions for Origami, a labyrinth, a jigsaw puzzle, a test “An artist or a monkey?”Multimedia:a program “The language of vervet monkeys”, slide show “Paintings and drawings of primates making and/or using tools”, a game “IQ of different animals”